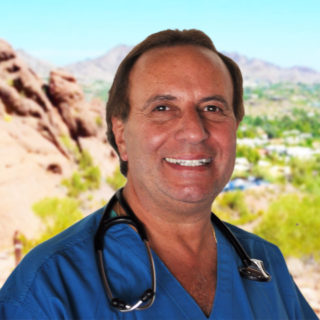 Steven J. Lipsky MD, FACEP has been a Board Certified Emergency Physician in Arizona for the last 41 years, and a resident of the Town of Paradise Valley for the last 40 years. He received his Doctor of Medicine degree from New York University School of Medicine and did post-graduate training in Family Practice at St. Joseph’s Hospital and Medical Center in Phoenix before going into the full-time practice of Emergency Medicine in 1975.Dr. Lipsky has worked in every type of Emergency Department in Arizona – from inner city and rural, small volume and large, public and private hospitals, teaching and nonteaching hospitals. He has taught at the Midwestern University Arizona College of Osteopathic Medicine – Division of Clinical Education, as well as in Kirksville College of Osteopathic Medicine Arizona. He has received the highest number of patient satisfaction letters in his group at multiple facilities and has been recognized at Paradise Valley Hospital for his outstanding performance.
A past President of the Arizona College of Emergency Physicians (representing over 800 Emergency Physicians in our state) along with many other positions in the organization, Dr. Lipsky was also one of six Councillors representing Arizona to the National Council of the American College of Emergency Physicians.Dr. Lipsky built, owned, and was the Medical Director for the first 24hr free standing Emergicenter and Advanced Life Support Ambulance Service in Jamaica. In conjunction with USAID, Cornell Medical Center’s School of Public Health, the Ministry of Health and Environmental Control of Jamaica, and the U.S. Peace Corps, he participated in a successful program to stem infant mortality in rural areas.Fluent in Spanish, Patois, and in conversational French and Hebrew, Dr. Lipsky now offers young and old a caring, personable, worldly, extremely experienced, competent physician for any urgent medical, wound, and orthopedic needs in the comfort of your home, hotel, or workplace!

I was suffering from a post-operative knee procedure, so I called Dr. Lipsky. He arrived promptly, diagnosed the situation, and got me under control. What more could you ask for? Prompt, no-hassle, and with results!

I have known Dr. Steven Lipsky for 25 years and consider him to be a friend as well as an excellent physician. Dr. Lipsky has treated me, my family and staff for various urgent medical conditions all with genuine kindness and superb care. His knowledge and dedication to his field make it easy to highly recommend his services to my friends and colleagues.

Thank you so much for your responsiveness in answering questions, my through exam and prompt feedback regarding my MRA/MRI and carotid ultrasound. The care and treatment received from you has been incredible, especially in today’s healthcare environment. I am very thankful for you and the care I received. I highly recommend your services to those in need.